According to Lionel Messi news, the Football pundit Terry Gibson says that Messi can leave Barca next season as a free agent.

In the month of July, the Argentine superstar has agreed to terms with the Barcelona side but he did not put his pen to that deal.

Lionel Messi news suggests that in the next season the 30-year-old could leave the Barca club and join the Manchester City side or the Paris Saint Germain side.

The Football Pundit says: "I always thought Lionel Messi, like Andres Iniesta and Xavi, would spend the bulk of the serious part of his career at Barcelona,"

"For years I found it hard to envisage how anyone could afford to take Messi away from Barcelona, but now we've seen the emergence of Manchester City and Paris Saint-Germain.

"Now I'm looking at the fact he's got only a year left on his contract. I think the new contract offer is worth €24m-a-year but if he was available on a free transfer Barca's offer would get dwarfed. If a PSG or a Manchester City can get an out-of-contract Messi we're talking, with the price of players now, €100m, €150m, €200m.

"I know he's 30 now but in terms of prestige and what a signing like that can bring to the club would be a real coup. It's not just the marketing, it is 50 games and 50 goals a season in whatever league he goes and plays in. I didn't think it would happen, but I actually think it might now." 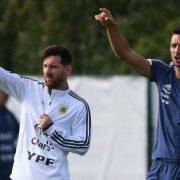