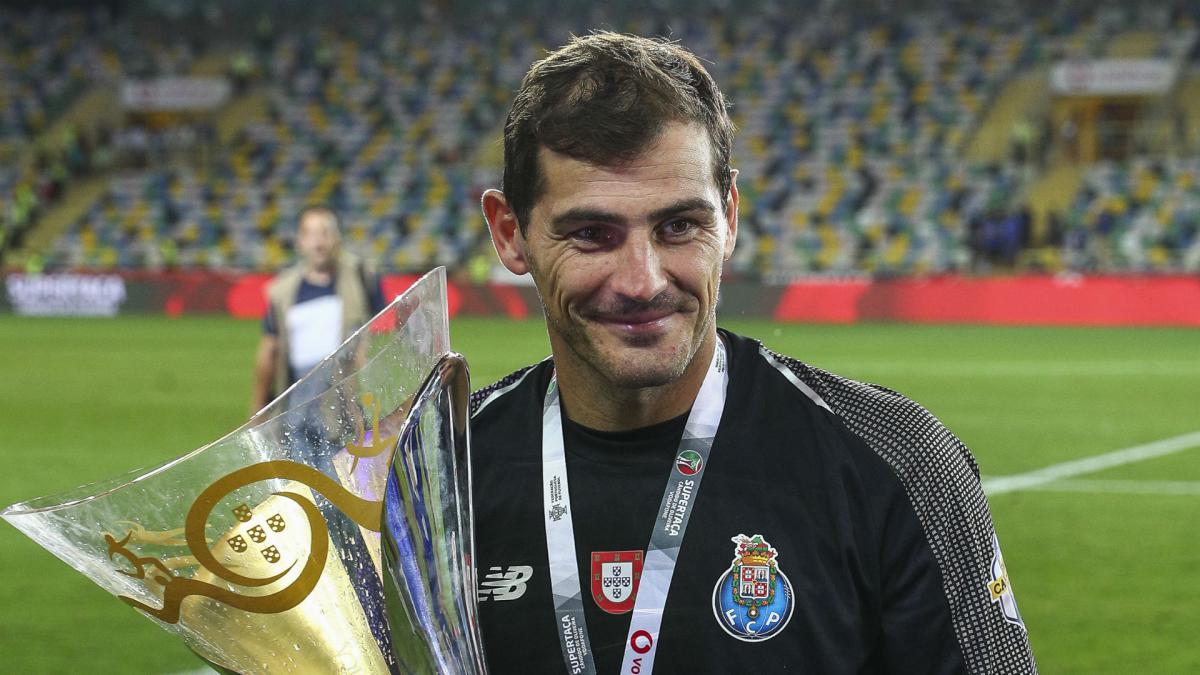 If we were to ask any football fan around the globe that who is the greatest goalkeeper in the recent history of football, we are likely to hear one name IKER CASILLAS. It was his influence in the game which gave him the status of a God standing between the sticks and people started to call him ”Saint Iker”. His athleticism, instant reaction and outstanding shot stopping ability could turn any match in favour of his team.

Iker Casillas was a nightmare  for the strikers. In an interview Casillas said “strikers always dream of scoring the best goal and I have always dreamt of stopping it”. Casillas had stopped several goals which could have won the Puskas Award.  His consistent good form had helped him to make up to the UEFA Team Of The Year for a record of 6 times and in the FIFA Pro XI for a record of 5 times between 2007-2012. Iker Casillas was the prime reason why the kids those days wanted to become a goalkeeper, he stood idol for many all round the globe.

Iker Casillas biography is all about his dedication over the years, about his family and his success story. 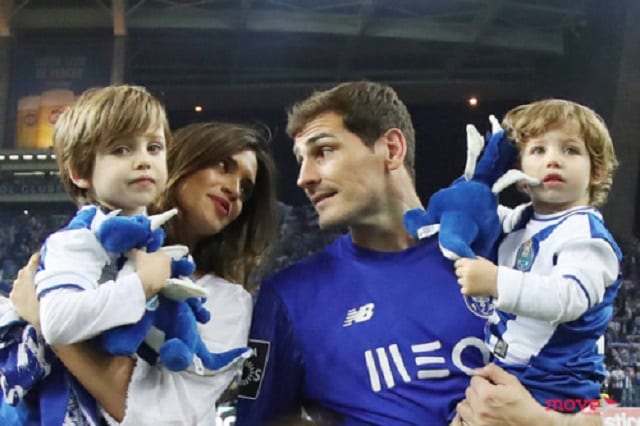 Iker Casillas was born in the year 1981 on 20th May in Mostoles, a province of Madrid, His father José Luis Casillas was a civil servant in the ministry  of Education and his mother María del Carmen Fernández González, was a professional Hairdresser, Iker Casillas brother named Unia Casillas who used to play this beautiful game football as a central midfielder for CD Mostoles, in the beginning Iker Casillas used to live in Bilbao with his family and later on they shifted to Madrid.

Iker Casillas is a family man. He met his wife Sara Carbonero during the Confederations Cup 2009 where his team had lost against Brazil but he had won the heart of Sara. Iker Casillas Wife Spanish sports journalist. Iker Casillas and Sara Casillas married in 2016 and Sara Carbonero and Iker Casillas  have 2 sons Martin and Lucas.  In an interview few years back Casillas said “ My family is all I have and I just want them to be happy”. An year back Casillas had suffered a heart attack which had horrified his family and the whole world still after few months of recovery he was found playing again for FC Porto. 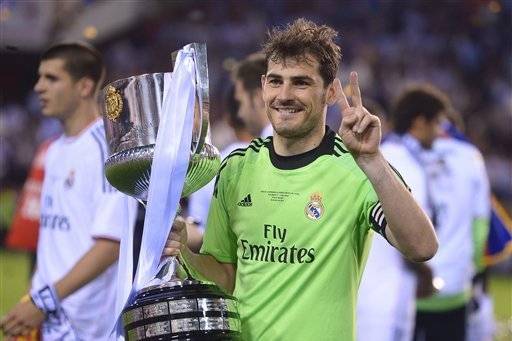 Iker Casillas is the first Spanish captain who guided Spain to their world cup glory in the year 2010 at South Africa and also he has won major International trophies like UEFA Euro Cup in the year 2008 and in 2012.

In his club career he has played most of his part with the Spanish giants Real Madrid and with them he has won three Champions League accolades and also five La Liga Trophies. 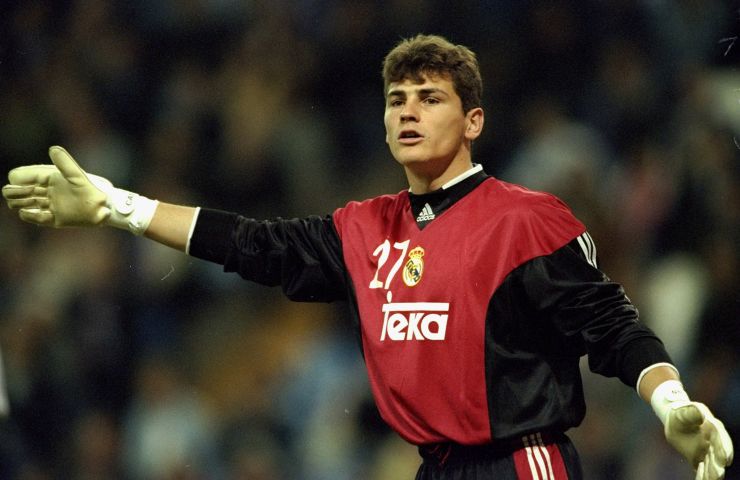 Iker Casillas history is known by many who idolize him. At the age of 4, Iker has decided that he wanted to be a goalkeeper and whenever his friends organized a football match he used to serve there as a goalkeeper.

Iker Casillas also had a brother younger to him seven years who played as a central midfielder for CD Mosteles. Iker didn’t have any wild side to his childhood rather he grew up normal with just a dream of becoming a goalkeeper in future. When aged 9 , Casillas’s father had seen an advertisement in the newspaper which had an application for the Real Madrid team. Casillas went to Santiago Bernabeau and was selected. From that point his career build up with Real Madrid began.

On one occasion as a young child, Casillas forgot to post his father’s football predictions for the weekend; his father had correctly predicted all 15 results, and the family lost out on an estimated €1.2 million. 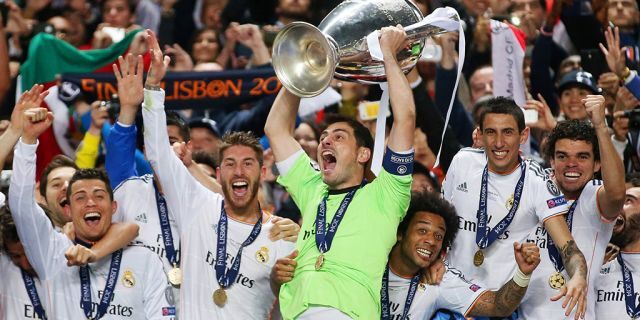 Iker Casillas Real Madrid career when he was just 9 years old when he was selected for an open trial, His quick reactions had impressed the trial coach. On November 27, 1997, Casillas being only 16, was called up in the squad for the senior team in the match against Rosenburg in the UEFA Champions League. In a recent interview, he said, “ I was in the school and the teacher was teaching when suddenly my mother rushed to my class and said I had to fly with the senior team to play in the Champions League”.

Casillas was Improving his game day by day and the expectations of the manager were from Casillas was also increasing but in the season 2001-2002, Casillas had started making unexpected mistakes due to over-confidence and lost his first-choice position to Sanchez who was the 2nd choice. Casillas had realized his mistake and luckily had got a chance in the Champions League final when Sanchez was injured in the 2nd minute. Iker Casillas goalkeeper had pulled out some extraordinary saves which had won the final for Real Madrid by a close call of 2-1 against Bayer Leverkusen.

In the upcoming seasons, he faced new challenges and always did everything which he could do to save his side from losing. He pulled out some saves which were out of the world. He had also received the lifetime contract by the club till 2017 which could have been automatically extended. He had also become the most capped goalkeeper in the history of football just at the age of 27.

In the summer transfer window in 2009,  Iker Casillas Transfer Rumors were Lurking in the air and huge bids were given for Casillas by big clubs like Manchester United, Manchester City, and Liverpool but Casillas in an interview said that “ I don’t have the intention of leaving my boyhood club”

During the 2009–10 season on 4 October in a game against Sevilla, Casillas made an extraordinary save, running from one side of his goal to the other to deny striker Diego Perotti in a one-on-one, close-range encounter. He had received a standing ovation by the whole crowd and all the players present on the field had no words to describe his greatness. After the match, the English goalkeeper Gordon Banks said  “Casillas’ reflexes are incredible. If he continues to play this well he will become one of the best goalkeepers in the history of the game.”

During the season 2011-2012, Iker Casillas Captained Real Madrid, He had won almost everything which he could win with the club. In January 2013 Casillas had suffered a serious injury and lost his first-choice position. Even after he recovered he was not given the first team, as Jose Mourinho and Iker Casillas were having some issues, and later on Club manager Jose Mourinho was criticized by Andres Iniesta for benching Casillas. At last, after 238 days Casillas made his first start but was injured in the 14th minute.

During the season  2014-2015, he retained his position as the first-choice goalkeeper and went on winning the UEFA Super Cup and had also made his 700th appearance for Real Madrid. Later that season he had to leave Real Madrid at a free cost.

Casillas Real Madrid stint was one of the memorable phases in Iker Casillas Biography. 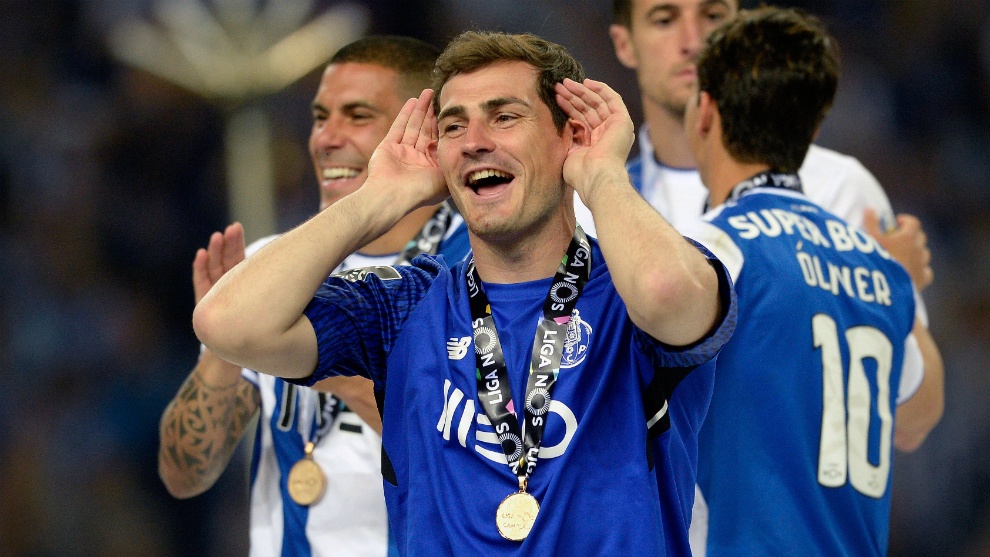 In July 2019, following his heart attack two months earlier, Casillas returned for pre-season training. Later that month, Porto announced that he had been given a role with the club’s coaching staff as he continued his recovery. In August, he was named in Porto’s squad for the 2019–20 season. In September, he shared the results of his medical tests on social media; at the end of the month, he stated that he would wait until March of the following year to see how he is progressing with his recovery before deciding whether to return to playing or retire, Finally, this year on 20th February Iker Casillas farewell was announced.

Iker Casillas Biography expressed that he ends his gilded career with the Portuguese club. 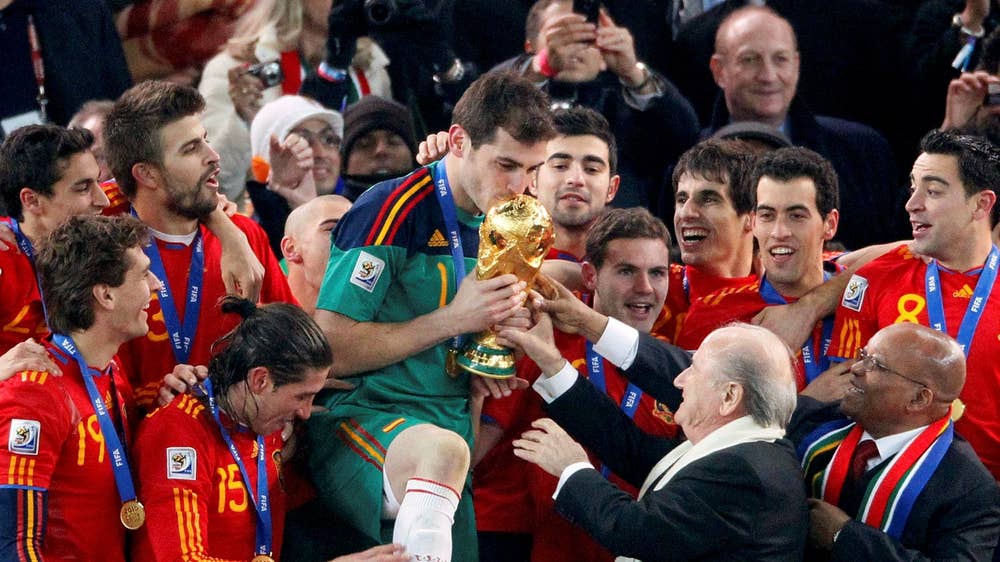 Casillas was the youngest player to be capped for the under  17 Spanish teams. At the senior team, he was initially the second choice but eventually, he worked himself up and got up to the first choice by his exceptional performances at club level.

Iker Casillas Spain Senior team debut was made in World cup 2002. He was supposed to be the second choice but the first choice had suffered a severe injury due to an accident so Casillas had got the first choice at the age of 21. He saved two penalties in the shoot-out during the round of 16 matches against the Republic of Ireland, earning him the nickname “The Saint”. One of his saves during the quarter-final against South Korea during the 2002 World Cup was rated by FIFA as one of the top ten saves of all time.

In the 2006 World Cup he was captaining the team but unfortunately could not save the team from losing 3-1 to Zinedane Zidane’s France.

In the 2010 World Cup he captained Spain to their first-ever World Cup title. Casillas had made two crucial saves in the final minutes of the final against Netherland’s Arjen Robben which had turned the match in the favor of Spain. Spanish Goalkeeper Iker Casillas announced the best goalkeeper of the tournament and also received the Golden Glove.

In 2014 World cup he became the 1st player ever to feature in 4 consecutive World Cups. In the team’s opening match, he made two mistakes leading to goals from Stefan de Vrij and Robin van Persie as the champions were defeated 5–1 by the Netherlands. After the match, Casillas apologized for the defeat and called his performance the worst of his career. Later in the tournament, Spain was knocked out in the group stages.

In the 2000 Euro, Casillas was included in the squad but was a used substitute, Casillas had played in all the 8 qualifying matches and had conceded only 4 goals but did not cap in the knock out matches.

In the 2008 Euro, Casillas captained Spain to lift the Champions Trophy. He kept clean sheets in the quarter-finals, semi-finals, and also in the finals. He was named as the best goalkeeper and also ranked 4th for the race of Ballon d’Or.

In the 2012 Euro, Casillas made a record of 100 International wins, most by any player. He also set a new record of playing 509 minutes without conceding a goal in the tournament. 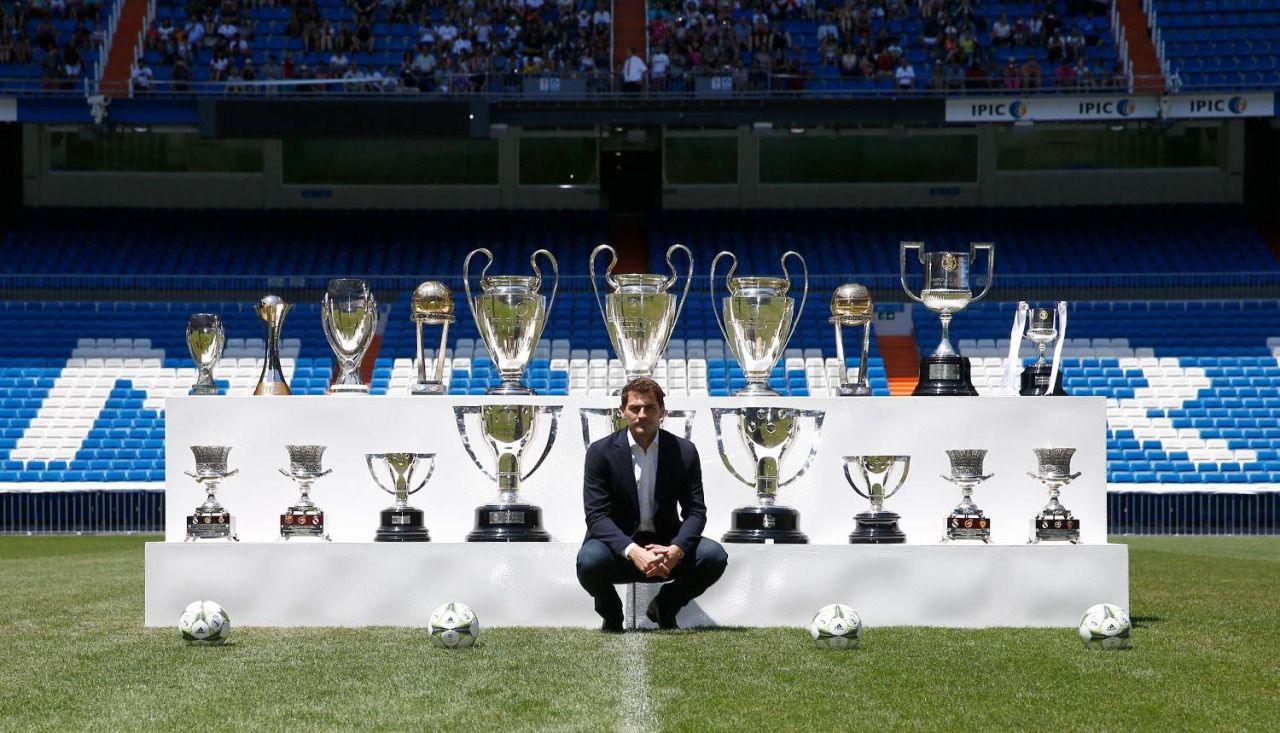 “Honestly, I don’t have to use up many words to say how good he is, the results are there for all to see. He has won everything there is to win and has been on the same great level for so many years now, which is possibly hardest of all for a goalkeeper. Spain almost never concede goals and Casillas is the main reason for that.”

— Juventus and Italy goalkeeper Gianluigi Buffon when asked about Casillas.

Here is the list of  Iker Casillas Trophies that he has won with his clubs and with his national side. 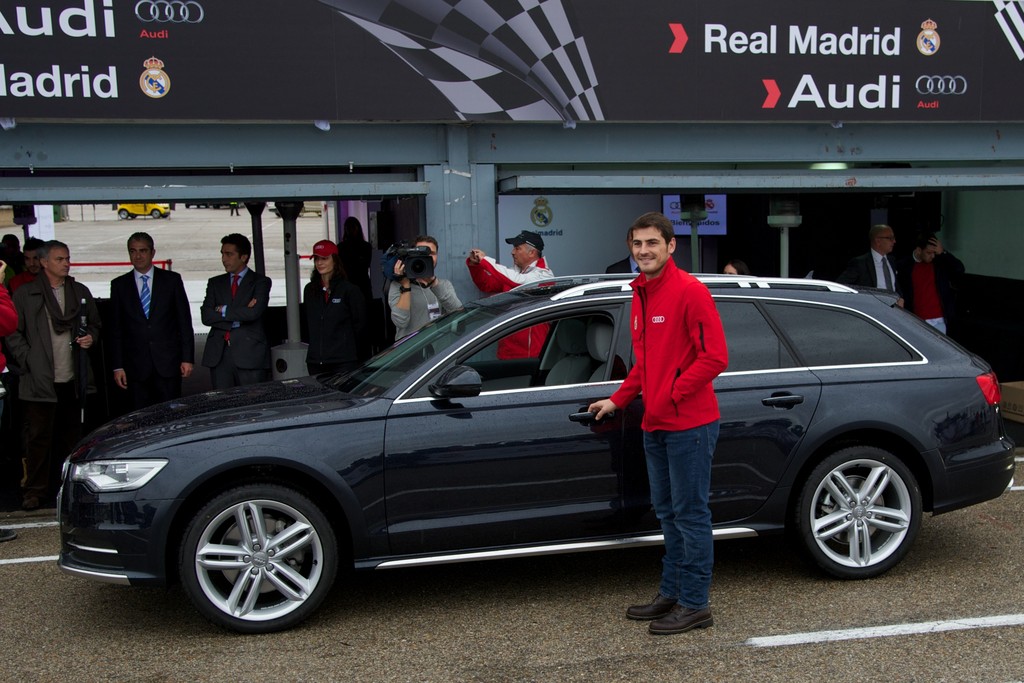 The Net Worth of the formal Real Madrid Skipper as of now in 2020 is around  $40 Million, most of his earnings came from his footballing life and also in his career he has endorse some big brands like Reebok and many other brands. 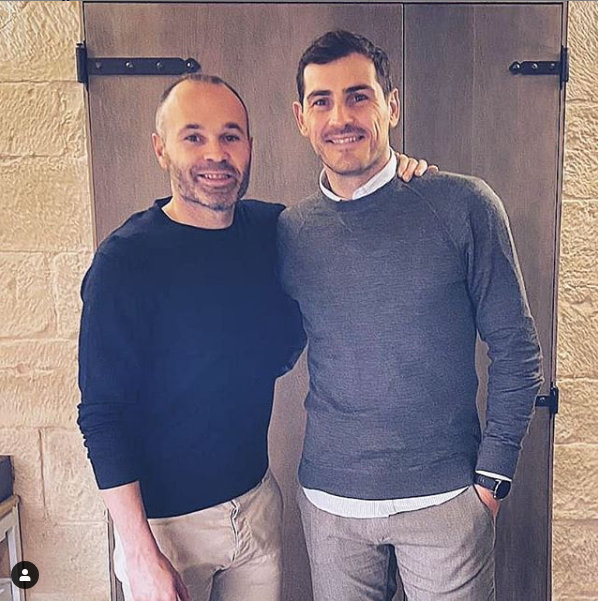 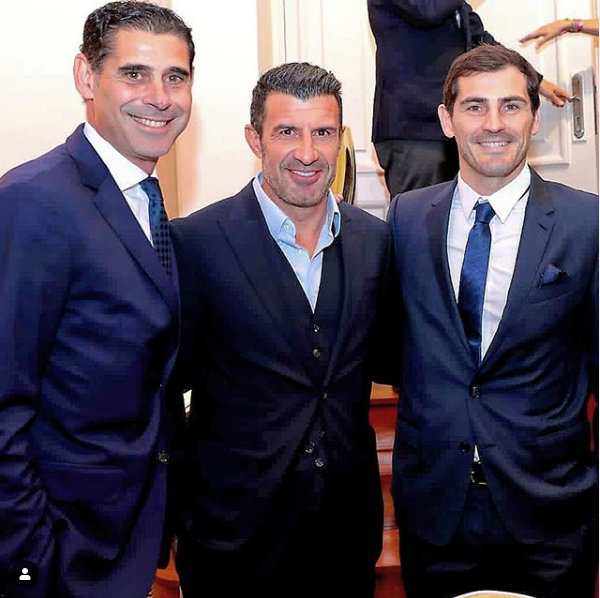 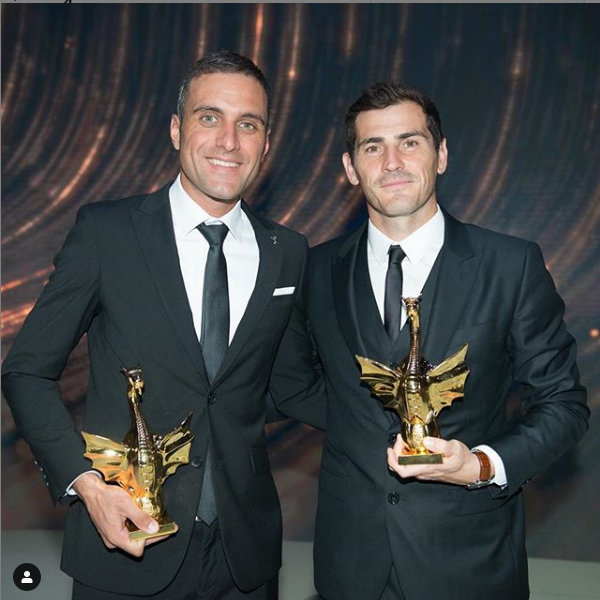 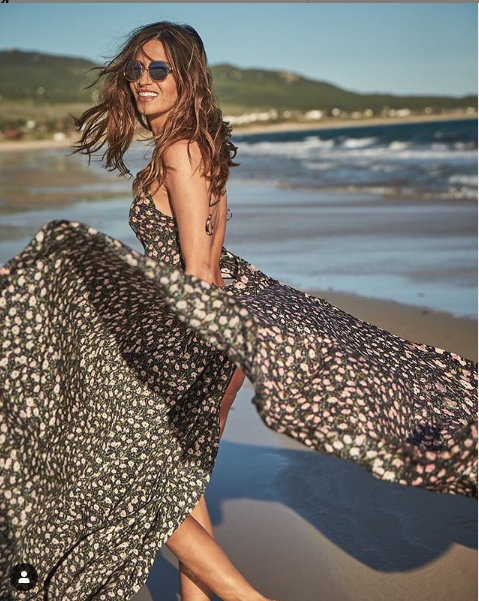 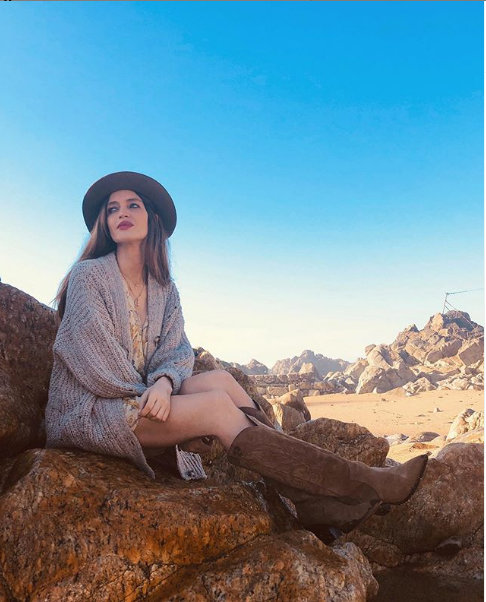 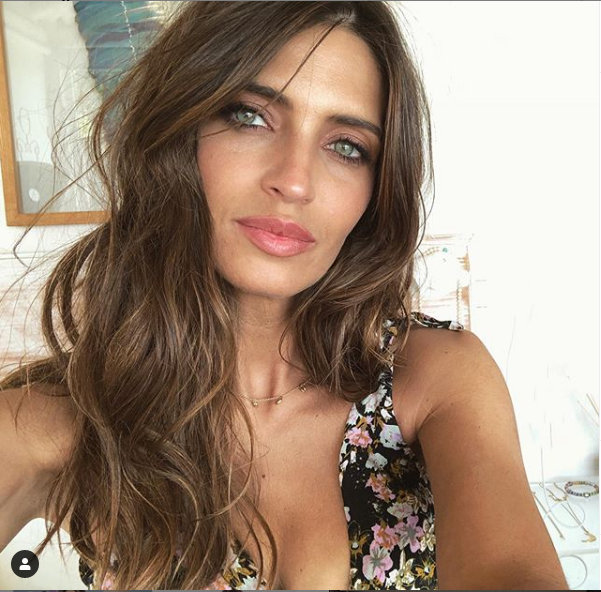 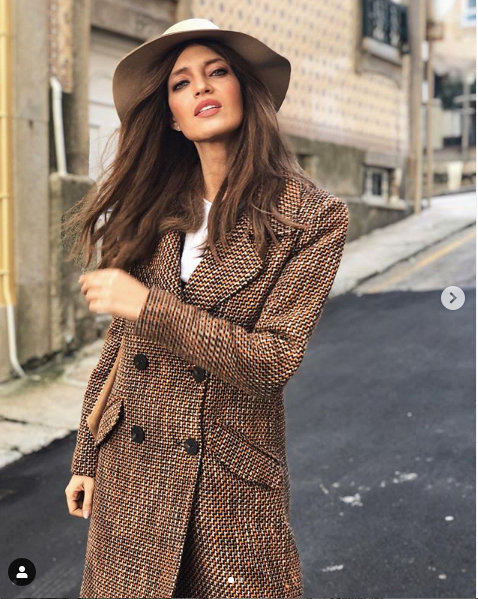 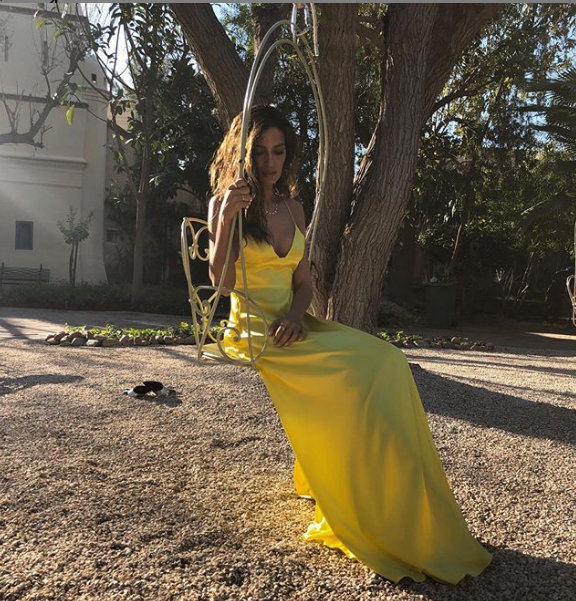