The English goalkeeper made many mistakes on loan with the Italian side than expected, though he made some good saves as well.

Urbano Cairo the club president of Torino avouched that Joe Hart’s mistakes were issues for the club this season.

This season the Serie A side sits at the mid of the table comfortably, according to the Club president Joe Hart also has done some good things as well.

It is that the president avouched they do not expect these kind mistakes from Joe Hart after what kind of credentials he has got.

Torino president said: “Hart made a few mistakes, especially when coming out for the ball,”

“He is an important goalkeeper. We probably didn’t expect so many mistakes from an England international… but he did some good things, too.”

While Hart’s future is in doubt but the Torino club has bigger problem to deal with,

As their main man, Belotti has gained many admirers in Europe and they are ready to bucket him in their squad so the Club president is ready to hold him back.

He voiced: “I have not received any requests for Belotti,"

"There are certainly many scouts observing Torino games, and I imagine Belotti, both Italian and foreign.

“I said many times, if Belotti stays for another year, he’ll be doing a great thing for himself and for us. Next year he could consolidate his status, score maybe 30 goals and gets to the World Cup.

“Andrea is a humble lad who wants to learn, so we’ve got a great rapport. I think this has been a good campaign, but there are regrets seeing some of the teams ahead of us slowing down now. We could’ve challenged for Europe, but in any case, we scored 65 goals, launched promising young players and Sinisa Mihajlovic built a good team.

“We chose this strategy of focusing on young players when Giampiero Ventura was the Coach and we’re continuing it with Mihajlovic. Lyanco will be with us next season and he was tracked by Juventus and Atletico Madrid.” 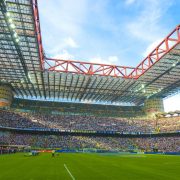