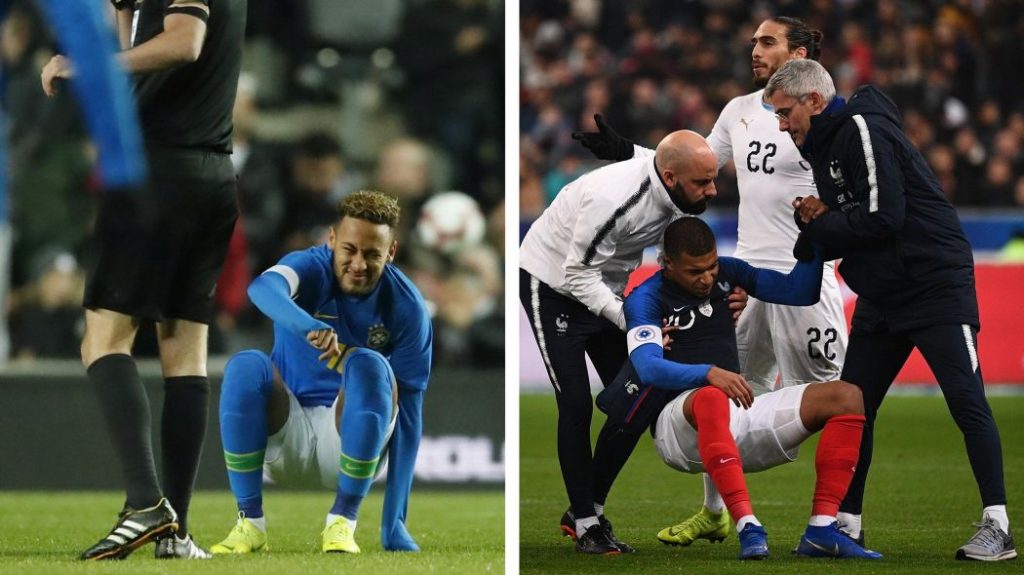 Superstar duo Neymar and Kylian Mbappe have received injuries while playing for their nation. But the knocks are regarded as “not very serious” and PSG is hopeful of their involvement in the upcoming Champions League fixture against Liverpool.

Neymar received “a right adductor strain” and lasted only eight minutes on the field in Brazil’s friendly against Cameroon. On the other hand France’s Mbappe left the field against Uruguay on half hour mark with “a bruised right shoulder”.

There were initial concerns with the severity of the injuries. But Neymar himself took to social media to declare that his problem is “nothing serious”. France’s coach Didier Deschamps also said that Mbappe’s injury was “no particular concern”.

PSG later revealed that they would be doing further examinations and would wait for 48 hours before making a final call on their fitness.

PSG coach Thomas Tuchel later revealed that he would not involve the duo in Saturday’s league game against Toulouse. He is hopeful that the players would return for the all-important match against Liverpool on Wednesday.

He said: “With Ney and Kylian, right now, the good thing is that it’s not very, very serious.

“But we do not take risks for tomorrow.

“They will not play, but there is the possibility that they play against Liverpool, it’s possible.

“I think – and this is my opinion, I spoke with the doctor and the players – I think they can play.”

PSG boss Tuchel has some bad news for Liverpool 👀https://t.co/Kwpz4N0kyT

This news would be a relief for the PSG fans as they know the importance of the match against Jurgen Klopp’s Reds.

PSG has made a faultless start to their league title defence campaign, as they have not dropped any points through 13 fixtures. The absence of Neymar and Mbappe would not matter much in the domestic campaign, but will surely be felt in Europe.

PSG are currently third in the Champions League group, with just two games in hand to reach the last 16. Their final game will be an away fixture in Belgrade against Red Star. So they would love to take full points against Liverpool at Parc des Princes.

Their cause will be ably supported if Neymar and Mbappe can play. This is because this pair is totally invaluable and has recorded 26 goals between them this season.