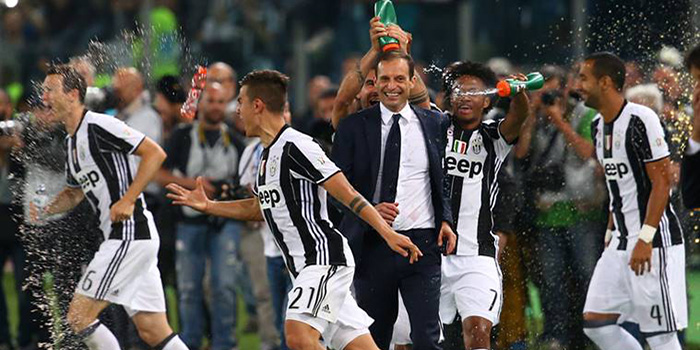 The Italian manager Massimiliano Allegri described his team Juventus as a team of champions and men of character. Juventus recently registered their win against Fiorentina by 3-0 goals and moved atop to 11 points clear in the Serie A table.

The Uruguayan international Rodrigo Bentancur scored the first goal for Juventus last night. Though Fiorentina got lots of chances to come back in the game. But the Juventus veteran centre half Giorgio Chiellini scored his first league goal for them in two years.

And the Portuguese sensation Cristiano Ronaldo scored the third goal from a spot kick and completed his 10th goal in Serie A.

Juventus is a team with men of character

This week Juventus booked their spot for the second round of Champions league as well. But their win last night at Florence give them a mammoth lead in the Serie A, which pleased their manager.

After the match, the Juve manager stated:

This is a team made up of champions and men of character.

Allegri: Juventus a team of champions and ‘men of character’ https://t.co/sPxM9NpC43 pic.twitter.com/ikOxLC97qO

“I asked for attention and compactness and the guys were very good. In the second half we left them the ball for about 10 minutes, but we managed to defend, we had our chances and we could have got to 2-0 even earlier.

“However, the team did well, they are starting to get to know each other and the ball goes better. Then we have great players and we have to be good at serving them and putting ourselves in the spaces they create.”