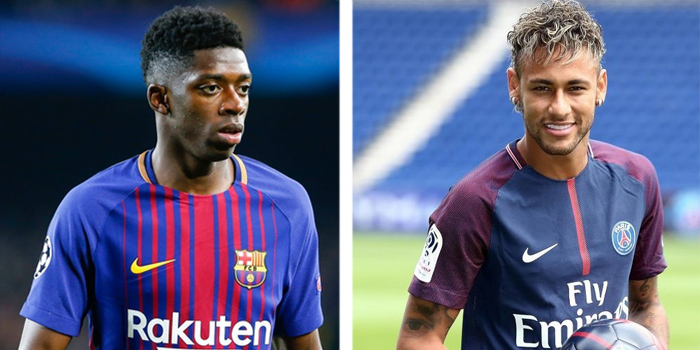 Ousmane Dembele has requested the Barca board to offload him in the coming January transfer window. Reports have claimed that the exit would facilitate Neymar’s return from Paris Saint-Germain.

The 21-year-old came to Barca from Dortmund in 2017 for a transfer value of €105 million (£93m/$120m). The board is reluctant to let go of the forward and would be looking for any offers in January.

Ernesto Valverde’s side is possibly looking for a deal with PSG which would include Dembele and some cash in return for Neymar. With the recent developments, many Premier League clubs are also taking interest in the matter.

Reports have emerged that Liverpool is interested for the World Cup winner, but neither Jurgen Klopp’s team nor Barca have confirmed any concrete evidence regarding the matter.

Dembele asks for transfer as Barcelona plot to use him in Neymar talks with PSG https://t.co/2lQJcguxrd pic.twitter.com/6jpIHACwLD

Recently Dembele’s attitude and professionalism has been put to question. He reportedly missed a training session after spending the previous night playing video games with his friends.

Moreover he was also criticised for his diet, as many fast food cartons were found in his house. He also reportedly threw away a healthy fish diet which was prepared for him by his chef.

Dembele was kept away from the squad in the recent 4-3 defeat against Real Betis. But both his agent and club officials have said that it was due to illness and not any kind of punishment.

Injuries have also not helped him as his first season at the club was hampered by serious hamstring problem.

Dembele’s teammates have supported him and he also featured in the scoresheet in the 1-1 draw against Atletico Madrid. But that is not going to make any differences as he will be sold in the winter transfer.

The 21-year-old has made seven appearances in his second season and has often played second fiddle to the likes of Luis Suarez, Lionel Messi and Philippe Coutinho.