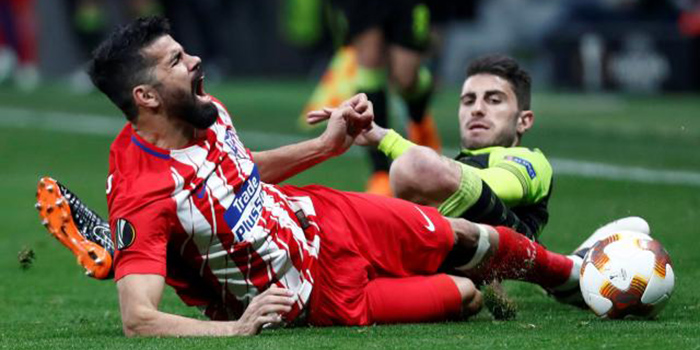 The Spanish attacker Diego Costa ended his goal -scoring drought against the Catalan giants from Griezmann’s corner, it is his first goal since February for Atletico Madrid.

Costa’s goal gave Atletico the lead and they were on track to leapfrog Barcelona in the table but Dembele hit back and deny Simone’s first La Liga win this fixture in seven years as a head coach.

After the goal,Costa had been substituted by the Atletico manager as Simeone says he has to withdraw him because of his injury.

In the post match presentation Simeone voiced: “He retired with a little discomfort in his foot and asked for the change,”

Because of his injury now his future is bit doubtful for their next match against Monaco in the Champions league on this Wednesday, but the Argentine manager want Costa to shake off his injury as soon as possible, because his first goal in La Liga against the Catalan giants can be a turning point for his season and also for Atletico Madrid as well.

Simeone added: “He’s an animal – and every time he’s on the field, the team has a chance to win.”

Diego Simeone could be without striker Diego Costa for Atletico Madrid’s (@atletienglish) Champions League game at home to Monaco. #AtleticoBarcahttps://t.co/9IxOS9p7nB

Atletico stifled Barcelona for much of the top-of-the-table contest, with only two shots on target recorded by either side

“The style was very similar because we both played something similar,”

“I liked everything, we had a commitment, we were close to winning.”