The French coach of Real Madrid avouched that Cristiano Ronaldo will be at Real Madrid for another couple of years.

In the recent past, there were rumors that in this season the 32-year-old Superstar could be headed to his former club Manchester United after he was alleged with Tax Fraud,

But Zidane End all those rumors by uttering the above mention quote.

The Portuguese superstar is the heart of Real Madrid line up for these years; he joined Real Madrid side from Manchester United in the 2009-10 campaign.

Zidane makes sure that the Portuguese talisman will be at Madrid under his wings for another couple of years.

Zidane uttered: "There has been a lot of talk surrounding Cristiano, that he wanted to go,"

"I only believe in one thing – whenever I've spoken to him, he has been very relaxed.

"He's on holiday and he will be back with us on the fifth (of August). I listen, just like everyone else, but the only thing I'm concerned with is what he wants to do with Real Madrid.

"He'll be here with us on the fifth and I think he'll stay for the next 2 or 3 years he's got left with us." 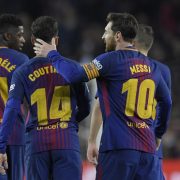