DR Congo international also bided for Bolasie spending €18M For his transfer and was declined by Alan Pardew until Everton F.C. came up with a much better deal for the Crystal Palace player at €25M.

And it is official in the transfer windows that Yannick Bolasie of Crystal Palace is to be signed for Everton this summer.

Ashley Williams, a Swansea centre back who is just agreed to a fee by Boss Ronald Koeman also flowed up with the talks and rumors of Bolasie.

Crystal Palace for their DR Congo winger received a €25M fee to move after being in Selhurst park for 4 years. Yannick Bolasie a 27 year old winger will be in the squad for the weekend opener opposite Tottenham, if and only if all the personal terms and conditions are fulfilled and medical is completed.

Last summer Bolasie signed a deal with the Crystal Palace for a 3 and a half year, but for the manager Alan Pardew offer of €25M from Everton seemed a good offer for him. 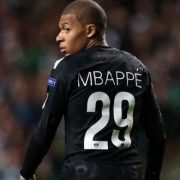