There were some rumors that the next transfer season Pepe could join any Chinese league and the Manchester City defender could join the Los Blancos side.

The Defender Nicolas Otamendi’s agent claims that Otamendi could jump up and take the opportunity to play for the Real Madrid side.

In his Valencia days he played some wonderful football for the La Liga outfit and because of that Manchester City have to pay £31.5 million to bring him in their team,

And now the Argentine player is also a key part of the Manchester City squad and his stock is also very high,

Real Madrid has to spend big for this defender.

Sendoa Otamendi’s agent said: "Nico is happy at Manchester City. But who wouldn't like to play at Real Madrid? It's the biggest club in the world."

Sendoa thinks at Real Madrid Otamdendi could be an ideal replacement of Pepe, whose contract is expiring with the Los Balncos side after this season,

He added: "Pepe is leaving Real Madrid and Otamendi fits the profile they are looking for.

"Barcelona have also followed him since he was at Valencia."

But right now the Manchester City defender is lock his horns for their upcoming Champions league games against Monaco, where he will have the duty to stop the in form Radamel Falcao.

The Colombian striker failed to impressed everyone in his EPL tenure with Manchester United and Chelsea but in Monaco he resurgence himself and became a key player for Monaco.

About Falcao,Otamendi added:  "He is a top player and very skilful inside the box.

"We were team-mates at Porto and we've faced each other when I’ve played against Colombia for Argentina.

"As a defender, you always have to be cautious when you play against him. Returning to Monaco was good for him and he’s scored 22 goals in 27 games, so he’s found his form again." 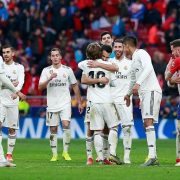