Football News: The Spanish midfielder believes that the Red Devils are in the safe hands under the Portuguese one ahead of their final against Chelsea.

United are heading towards right direction under Mourinho: Hererra

Manchester United and Chelsea lock their horns for Today’s showdown, both the teams will be at Wembley today for the F.A cup final.

Today's the day – bring it on! #MUFC #ForUnited #EmiratesFACup pic.twitter.com/lxptOVav2O

He voiced: "I think we are going in the right direction,"

"Let's put everything in perspective. Two years ago, we were fifth in the Premier League and FA Cup winners. Last season we won three trophies and were sixth in the league. This season – second in the league and we can win a trophy, the FA Cup.

"After Sir Alex Ferguson, we've had four years of transition and now I think the club is going up with this manager.

"This club is about winning titles and reaching finals and this will be my fifth final in two years. If you talk with other football players, they would like to be in our position."

In 2014 the Spaniard joins United and now his only one year of the contract remains with the Red Devils, but the Spaniard avouches that he is really happy at United and in future he wants to fight for the first team spot.

He added: "My future is the cup final. I want to be here next season and unless the club sack me, I will be here in pre-season and fight to keep adding games to my total. In football, what today is black is tomorrow white,"

"So, if you think about what can happen in the summer, maybe the club signs four midfielders and they don't want me anymore.

"The only thing I can do is train good today and train good tomorrow. That's all I can say – and of course if the club wants to talk to me I will listen to them because I am happy here." 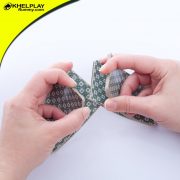