Football News: the Argentine national coach Jorge Sampaoli believes that the five-time Ballon d’Or winner is not able to enjoy his game for his country with the expectation is so high from him.

Lionel Messi News: The expectation is too much on Messi’s shoulder.

The Argentine national gaffer thinks that the world cup dream is like putting a revolver in Messi’s head and he also feels this pressure can damage Messi’s performance.

Lionel Messi has won five Ballon d’Or awards and also numerous trophies with his club Barcelona so far but unable to lift any silverware with his national side, in the last three times he has reached to the finals of World cup and Copa America but unable to get beyond the line.

This year he will have another opportunity to get his hands on the most prestigious trophy on international football In Russia, but the Argentine coach believes that this time the expectation hopes are really high from him.

Sampoli has written a book from which some snippets are: "Messi has a revolver put to his head called the World Cup and if he doesn't win it, he's shot and killed.

"As a result, he can't enjoy his talent.

"What I find is that the negativity surrounding international football damages Messi."

While the expectation is really high from Messi, the Argentine manager accepts that he is working with a special talent. He added: "At this moment, I feel that I'm coaching the best player in history.

"This is a guy who has stayed as the best in the world for 10 years.

"It's difficult to assume a level of control when your leader knows he's better than you, he executes things like nobody else." 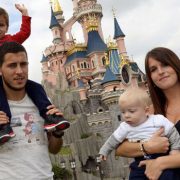