The former AC Milan coach believes that Juventus has what it takes to replace the statuesque of Barcelona in European football and also feels Messi has gone past his golden time.

The Catalan giants have been tossed up in the air  very badly by PSG when they lost by 4-0 to the French giants n Champions league round of 16 earlier this week.

Now Arrigo Sacchi making all this comments about Barcelona and Specially about Messi that “the Barcelona King is dead” is sure to make their time more miserable.

We all are very familiar of what Barcelona can come up with as the second leg is still waiting to happen where Barcelona will definitely  try to seek redemption.

But in the mean time questions and fingers are being asked and raised as to what happened to the famous aura of Barcelona, and some also  believes that Barcelona is no longer a side that they used to be and Messi has someone become a shadow of his past.

Once a formidable side now has become a bit Mockery as what  is to believe that Barcelona is no longer capable of holding their superiority in European football.

In an Interview he told to La Gazzetta dello Sport:

“The Barcelona King is dead,”

“There is another sovereign who continues to impose his rule, Real Madrid, but [there is] also space for a newcomer to slip on to the throne.

"I see Juventus perfectly suited for that role. They are improving and, at the moment, are the favourites along with Real Madrid to take the trophy.

"For some time, Barcelona have not been the old Barcelona. In La Liga they also beat the weak clubs with ease, but struggle with stronger sides. You no longer see that aggressive, organised and hungry team we so admired.

“The Catalans dominated for 10 years, imposing a style of play that was at times truly marvellous. They gave a football lesson to the whole world. 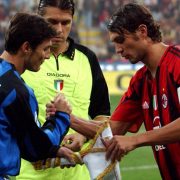