The Uruguay international Luis Suarez, who is currently playing for the Spanish giant FC Barcelona since 2014 is one of the best football players on the planet right now.

And his former club Liverpool FC’s teammate and Liverpool legend, Steven Gerrard has recently admitted that he believed Liverpool would have had a better shot if Suarez had stayed on Merseyside. Not really news — Luis Suarez would help any team’s chances at a title.

The 30-year-old Uruguay international Luis Suarez was the one of the star at Liverpool FC, where Suarez scored more than 70 goals in more than 100 appearances before he moved to Spain to join the Spanish giant FC Barcelona in 2014.

And recently speaking about Liverpool’s dreams of a league title, Gerrard affirmed that he believed Liverpool would have had a better shot if Suarez had stayed on Merseyside, The two men played together under Roy Hodgson and then Brendan Rodgers before Suarez went off to Barcelona.

And Still, Gerrard’s admiration for his friend and teammate was apparent when discussing their time together.

As in a recent interview, the 36-year-old former Liverpool and England legend Steven Gerrard said,

“There’s so many good teams in the Premier League but he would have given Liverpool a better chance,"

"You’re guaranteed goals, assists, he just causes every opposition problems and creates a lot of space for the players around him.”

“He’s relentless – that’s the word to sum him up. He scores great goals, all type of goals, he creates out of nothing.”

"He occupies the whole back four by himself. He was an absolute dream to play with. He was always on the move so that you could pick him out. Just a phenomenal footballer. He’s gone to another level since he moved to Barcelona with his goal and assist return." 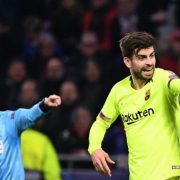