Last night the Serie A giants Inter Milan won their match in a style against Cagliari by 3-1 goals.

The winger Antonio Candreva avouches to Inter Milan counterparts to take their triumph against Cagliari as a statement of intent from Luciano Spaletti.

Last night inter captain Mauro Icardi scored a brace for his side and that took his tally to 15 goals for this season and the Croatian midfielder Marcelo Brozovic scored the another goal for them.

Right now they are sitting at the top of the Serie A table but Napoli can replaced them if they can get a win against Udinese today.

The Italian international Candreva thinks with that with that win they sent out a strong signal to other teams.

Candreva said: "It was a match full of pitfalls, we knew it would be,"

"It was a very strong performance from all aspects. We gave out an important signal.

"After the start, we changed it around a bit and got the goal with Mauro.

"The important thing was to get the three points."

In their next match they will take against Chievo. 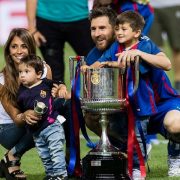