The Italian manager of Napoli persists that this season his side will need more than 90 points to win Serie A this season.

The Serie A leaders Napoli is on the top of the Serie A table, last day they defeated Sassuolo by 3-1 goals and stays three points clear on the top.
Maurizio Sarri feels that this season the Napoli side will need more than 90 points to dethrone Serie A champions Juventus.

This season they have won 10 games out of 11 and they scored 32 goals this season so far in Serie A.

But Napoli coach knows his side still needs to travel a lot to claim scudetto title since 1989-90.

Sarri said: "Right now, the forecast is a bit improbable. I don't think the top teams can continue to keep this pace,"

"Many smaller team will get new players or they will find their game. Going forward the games will be different, harder. This pace is destined to slow down, not just for us but for any team looking to win the title.

"The feeling though is that we will need to have more than 90 points to win the championship."

This week in their Champions league clash they will face Manchester City at Stadio San Paolo, in their previous Champions League match they bite the dust against them in Manchester City’s home ground by 2-1 goal.

Following Napoli’s win over their Seire, A rival Sassuulo Sarri said: "Thinking of the Champions League as an obstacle would be unfair. The Champions League is the world's biggest competition for clubs and we're proud for being part of it. That's why we need to play with great determination.

"It's obvious though that we're going to think about where we can be more competitive and we're going to put our energy in that. That's a danger that can happen even if you don't want to. Playing against Man City will not be easy, but it will also be great. Right now, Cityare the best team in Europe." 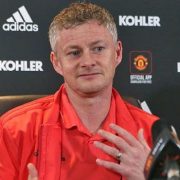