The Italian international is inspired by his team’s performance against Chelsea and that makes these Serie A giants the Group leaders.

Last night the Serie A side bulldozed Chelsea by 3-0 goals, and El Shaarawy scored a brace for his side and also said it was the night that is unforgettable for them.

In the previous encounter the match was ended by 3-3 goals at Stamford Bridge but last night the newly appointed Eusebio Di Francesco' men outsmart Chelsea in Stadio Olimpico.

Roma star El Shaarawy scored a wonderful goal for Roma in their last Serie a match against Bologna and because of that he made into the team against Chelsea and last night also he lashed past Courtois from 25-yard shot.

After that match, El Shaarawy said: "It's the kind of night that you never forget, for the rest of your life,"

"This is a special night – it was my first brace in the Champions League, plus beating Chelsea 3-0 doesn’t happen every day. This win means a lot to us.

"It means a great deal [to go top of the group]. When the draw was made, there was some doubt surrounding us.

"But we went to London and played a really good game, at a tough ground. Now we have an important game before the international break [at Fiorentina in Serie A]. We're purely focused on that." 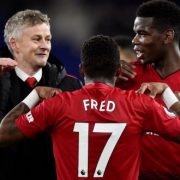