This season the Italian international made a shock move from Juventus to Milan but now he is not happy at Milan with their current form.

According to some sources, this season Bonucci is finding a way out from AC Milan, the Italian defender is really unhappy at Milan.

This season Bonucci moved from Serie A title holders Juventus to Milan for €40 million, and after joining Milan the Serie A giants handed him the captain’s armband.

Though this season Milan open their bank accounts in the transfer market to make them established for the Serie A title contenders, but this season so far they have suffered a nightmare.

Currently, they are in the eight spot in the table and they are 18 points behind the Serie A leaders Napoli, and in between that they have sacked Vincenzo Montella and In place of him they bought former Milan midfielder Gennaro Gattuso.

Milan officials stood their ground that this winter season they will not sell any first team player but some rumors are there that, Bonucci is ready to change his jersey.

EPL giants Manchester City made an attempt to acquire him but they were unable to connive to move away from Italy.

Former Juventus manager Antonio Conte is also eyeing to grab him in this winter season. 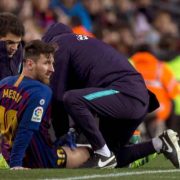