The Brazilian full-back has own on biggest stages with his former club Barcelona and  Juventus and now he has challenged his present club Paris Saint Germain to do the same when they will host Real Madrid at Parc des Princes.

Dani Alves believes that today PSG must show to the world that they are more than just demolishing transfer records when they will host Madrid for the return fixture on Tuesday last night.

Madrid got a 3-1 lead against the Paris Saint Germain side on the first match, and they are sitting in a comfortable position ahead of this second fixture, While PSG has to outturn the result today without their star man Neymar, as he got a broken metatarsal.

This season the Brazilian superstar has joined the PSG side from Barcelona for a world record fee of €222million, and his compatriot Dani Alves join the French capital side from  Serie A giants Juventus on a free transfer.

Last season also Barcelona faced 4-0 defeat at Parc De Princes but its Neymar who played some magical football at Camp Nou and thrashed PSG by 6-1 goals.

Now Dani Alves feels that this kind of match is a must-win match for PSG if they want to prove to the world that the huge investment from Qatari is not going wasted at Paris.

In the pre-match conference, Dani Alves said: "What are PSG missing? Matches like this to show that Paris is not all about money,"

"I came here because I am a competitor – it's in my blood. And being part of the history of the club isn't something you can buy.

"If I speak to the squad, I'll say we have to seize this important moment. History is there to be changed.

"Changing history was one of the big reasons I came here and now we have to do it. We can't even think about it – we just have to do it. And we believe we can.

"We think we can go through because of the first leg. We were superior to them in our play and the chances we created.

"We have to do that for the full 90 minutes this time. It's a huge motivation to be able to knock out the holders. 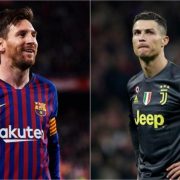