The former Real Madrid midfielder Mesut Ozil accolades about the former Teammate Ramos, he thinks that Ramos has the amazing ability to score goals.

The Arsenal player believes the goal scoring ability of Ramos for Real Madrid at the crucial stage makes him one of the best defenders in the world.

Tomorrow he will lead the Los Blancos side in the Champions League final against Juventus and in the 2014 and in 2016 he scored crucial goals for Real Madrid side in the UCL finals.

Ozil he played three years with him at Santiago Bernabeu believes his attitude makes him what he is now.

Ozil said: "[Important goals are] what characterises him,"

"He's not one of the best central defenders in the world, or in the history of football, for no reason.

"He just wants to be successful and you see on the pitch that he never gives up, right until the last second where some players might say: 'Oh, it's over.'

"But his attitude [is that] he's always there for the team and I'm pleased for him when he scores a goal and is successful."

This season he has scored 10 goals for Madrid. 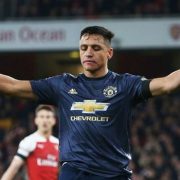