The 30 year old Real Madrid goalkeeper accolade about his team mates Sergio Ramos after his performance against Napoli in the Champions league’s second leg.

Last night the Real Madrid defender and skipper Sergio Ramos single handedly helped his side to win their match against the Napoli side,

The Los Blancos side advanced to the next round on 6-2 aggregate.
Ramos saved his side few months ago against their Arch Rivals Barcelona and in many more matches.

The defender also scored in the 2014 and 2016 Madrid’s Champions league triumph,

The Real Madrid goalkeeper Kaylor Navas was impressed with his performance.

Navas said: "Ramos is a very important player, he is always there to help us out and we have got to be pleased with the result,"

"He has got a striker's instinct within him, whenever he goes up for corners we have real belief in him and when it comes to headers, he has always got the ability to put the ball where he wants to."

This season the defender has scored nine goals for his side in his 28 appearances. 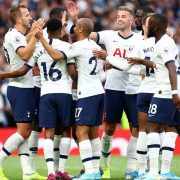