With the Argentine captain, Messi is suspended for the four matches, Diego Maradona is not sure Argentine will qualify for the main stage of world cup of not.

The Argentine legend Diego Maradona is in doubt whether his country can reach to the main stage of world cup this term or not as their main man Lionel Messi is suspended for four games.

In the qualifying matches, they won just only six matches out of 14 matches and in the table, they are sitting at the fifth spot (in the playoff spot).

In their match against Chile the Argentine captain was handed a four-match ban for insulting match officials and in the next match they face a 2-0 loss against the Bolivia side and after the match, the Argentine national team sacked the head coach Edgardo Bauza from his duty.

Maradona said: "We are screwed,"

"Without Messi, qualification is doubtful."

Argentina yet not appointed anyone as a replacement of Bauza and their four qualifying matches are remaining against Uruguay, Venezuela, Peru, and Ecuador. 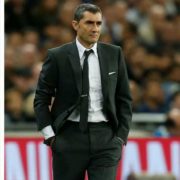