The Veteran Ibrahimovic says that this season he can play a new role for Manchester United.

The Swedish has been out of the action since April when Manchester United get a victory over Anderlecht in April, but the Special one hinted that before the end of 2017 Ibrahimovic may return to action for Manchester United.

"The one who makes the difference, gets noticed, wins the matches and is the leader. And I see myself in that position but it is not something that is given to you, it is just something you are, that's just the way it is.

"To be honest, it is like a trigger for me coming back from that injury because I wore the No.10 in the Swedish national team and PSG. I would have worn it at Inter but I soon moved to Barcelona. I wanted it in Milan but took another number out of respect. In Ajax, I didn't have it.

About his injury, Ibrahimovic  voiced: "I tried to take down a ball with my chest and timed the landing wrong,"

"I stuck my legs out and landed completely wrong. The leg went backwards and then it was pulled out. I have never been hurt, but then I felt I swallowed my tongue. It was a strange feeling that I had never known before.

"I told myself it's just a bang up. But when I got up, I felt that the leg was not in balance. In the locker room they started to check the leg but without an X-ray it was impossible to say exactly what the problem was. It turned out to be a cruciate ligament injury." 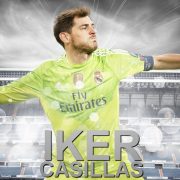