Real Madrid is in pursuit of 4th Champions League . According to Madrid Coach Santiago Solari , “Nothing is impossible” for the Los Blancos.

Under some great circumstances, Madrid has won major International Tropies in recent years . They have been dominant over other clubs winning  3 Champions Leagues consecutively.

Since the departure of their talisman Ronaldo , Madrid has not been the same . They have lost many matches , even the sitters. This season their gameplay was not so good also.

This was the tweet from Real Madrid after winning Madrid Derby :

Nothing Impossible for Madrid – Solari

Despite knowing the fact , Los Blancos coach Solari believes they can win Champions league again. When asked , He replied by saying Madrid can achieve anything and anything is possible for them.

Other articles relating to Football :

Madrid will face Ajax in the knockout stage. This is the First leg in their last-16 , which will be played in Wednesday in Amsterdam. Solari knows the difficulties he will face against the Dutch giants. Ajax last won Champions League in 1995.

Ajax are very well known for their work in the youth system, for their commitment to young talent and their offensive football,” he said.

That’s the way they still work, with a team that has already shown that it was competitive last year and that it remains competitive this year.

The tie is going to be difficult, like all these occasions in the Champions League

Madrid will play against Girona after their Champions League match against Ajax. Girona have won 2 consecutive league matches recently in La Liga and is in a good run of form .

Though Madrid is in bad shape , they have the fire power in them . In a good day , they can defeat any team in any given circumtances. Los Blancos will rise again. 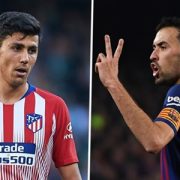