The Catalan supremo heaped praised about their attacking trio he believes that have changed the way people believes the team can build.

Luis Enrique believes that the Barcelona attacking trio “MSN” redefines football’s power after they crossed 100 goals between them for the season.

Last night they demolish the Villarreal side by 4-1 goals and for Barcelona Messi have scored two goals and also Neymar and Suarez were also on the scoresheet.

After their wonderful football against their counterpart, the Barcelona head coach spoke of breaking the mold by possessing three superstars.

Guardiola voiced: "There was just one star per team years ago,"

"Here, there was the possibility of signing Neymar and there were criticisms because there could not be two stars.

"Now there are three, which is something to be valued. They are the best in the world."

Luis Enrique praised out singled about Neymar because of his wonderful dribbling skills.

About Neymar he said: "Time will tell if Neymar can mark an era,"

"He has an interpretation of football that is totally different from anyone's, even that of any Brazilian.

"He understands football as an art. I do not give myself time to see every dribble he does, but it is a great pleasure.

"It makes Neymar's skills often look more like ballet or something exceptional than a soccer dribble. It's nice, effective and spectacular." 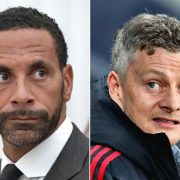