The La liga defending champions FC Barcelona has defeated the Spanish giant Atletico Madrid in a La Liga clash on Sunday, which means the Argentine ace and FC Barcelona’s star Lionel Messi has now won 400 games in all competitions for the La Liga champions.

The Argentina international and FC Barcelona’s hotshot Lionel Messi has now won his 400th competitive match as a senior player for Barcelona.

The 29-year-old five times ballon d’Or winner Lionel messi, who made his debut for FC Barcelona against Jose Mourinho's Porto in 2003, has made 566 appearances for Barca in all competitions with 400 wins, 102 draws and 64 defeats.

As Sunday’s win over the Spanish giant Atletico Madrid was his 400th competitive match win as a senior player for Barcelona, where Messi scored the decisive 86th-minute goal to give his side victory against Atletico Madrid at the Vicente Calderon – a result that sends the champions FC Barcelona temporarily top of La Liga. 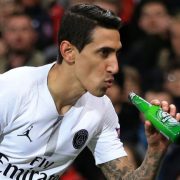