The England international Harry Kane, who is currently playing for the Premier League giant Tottenham Hotspur moved level atop the charts with his hat-trick during the rout of Stoke City and he feels confident in his ability.

Tottenham's Harry Kane admits he is 'up there' with world's best after latest Premier League hat-trick @Matt_Law_DThttps://t.co/Ha0eRCL6GK

As the English striker Harry Kane believes he is among the best in the world as he is the current lead goal scorer in the Premier League 2017.

The Spurs star Kane has already scored 22 goals in all competitions and 17 top-flight goals this season, along with Romelu Lukaku and Alexis Sanchez, having claimed the Golden Boot last term.

As after scoring his record-breaking hat-trick during Sunday's 4-0 rout of Stoke City, 23-year-old England international moved level atop the standings, which made him feel confident in his ability.

As in an interview the Tottenham star Kane said, "If you look at my stats, my goals, then I'm up there,"

"If you guys want to print that, I'm more than happy to have that.”

"I like to score goals, obviously I will try to score as many as I can from now until the end of the season. I feel in good form."

"I think I'm on 22 now for the season. Just got to continue and hopefully get as many as I can until the end." 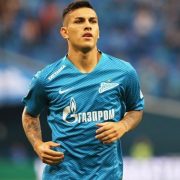