The France international and Atletico Madrid star forward Antoine Griezmann has admitted that he deserves to win UEFA's Best Player in Europe award.

The 25-years-old Atletico Madrid’s star forward had an impressive 2016/16 season where he scored seven goals in his 13 appearances for the club and helped the club to reach the Champions League finals against the Spanish giant Real Madrid but unlikely lost in the final.

After such an impressive season Griezmann has made his name on the shortlist of the UEFA's Best Player in Europe alongside Cristiano Ronaldo and Gareth Bale.

As Griezmann said, “I am proud to be a finalist, that means I am on the right track and have to continue that way,”

"I don't want to sound arrogant, but I deserve this award because I've had a great season with both club and the national team.

"It has been unforgettable season, first in the Champions League with Atletico, then Euros with France.

"Unfortunately, we didn't win a trophy and it was a blow for us, as well for our fans." He added. 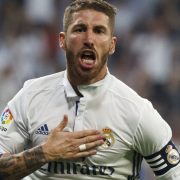