On Saturday Rooney scored a wonderful goal against the Stock City in the dying minutes and with that goal, he has netted the 250th goal for his Manchester United,

In the FA Cup third round he scored the goal against Reading and with that goal, he drew the level with Sir Bobby Charlton.

Questioned asked to the former Manchester United manager Sir Alex Feruson that what he thinks can anyone break his record..

"I couldn't say never – never say never – but if you look at modern-day football, Manchester United are one of the few clubs who can keep players for over 10 years.

"It is more difficult than ever but we were very lucky – if you look at my time, even in [former manager] Sir Matt Busby's time, we had players who stayed for more than 10 years. Many, many players did that and Wayne is one of them.

"But, in the modern day, you see it happening less and less that players stay for that length of time. For instance, [current manager] Jose [Mourinho] mentioned young Marcus Rashford and he's got to score more than 20 goals a season for the next 10 years or so and that is difficult in itself.

"You hope it lasts and he stays here more than 10 years but there are fewer players doing that now."

Wayne Rooney gets another good opportunity to increase his goal tally in the EFL semi final against Hull City. 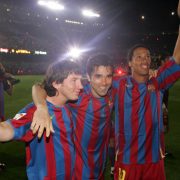