The Juventus striker warned his team-mate by saying that Barcelona’s capitulation in the Champions league cannot be expected.

The new Juventus striker believes that Barcelona team had one bad day in Paris and persist there will be no repeat of that.

Both the teams lock their horns for their Champions league Quarterfinal matches,

In their previous match the Barcelona side lost their first match against the PSG side by 4-0 goals and in the second leg they thrashed them down by 6-1 goals and entered in the next round.

But this time the Juventus striker Higuain is confident that the Barcelona team would not surrender them slaves in against them instead of that he thinks the Luis Enrique’s men can offer the best football against them.

Higuain said: "Barcelona had a bad day in Paris but I doubt they'll have another,"

"Football can change very quickly and a team that looked like they were eliminated are now in the quarter-finals."

This season the Argentine striker joined the Zebre side and so far he has netted 23 goals for them in all competitions.

He also believes that this season the Serie A champions can win the Champions league silverware.

He added: "I hope it's the right year to win the Champions League, that's why I came here,"

"We also fight for the sixth consecutive league title and Coppa Italia." 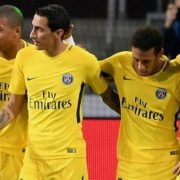