The Spanish center back duo has a poster boy image in the El Clasico feuding will not have an impact on their international duty.

The Barcelona midfielder believes that there is no feud between the Barcelona defender Gerard Pique and Real Madrid center back Sergio Ramos once they are together for their international duty.

The Spanish defenders are serving for their country for long years and together they have won many trophies together for their country but sometimes their partnership has frequently clashed as they are elated performers on either side of El Clasico.

In the recent past, both of them snipped over referring decision, both of the thinks Referee gives some favorable treatments to other’s side.

The Real Madrid defender avouched that he will give his teammate Pique a hug when they will meet in Friday’s qualifiers against Israel.

Busquets said: "They are many years with the national team, Ramos, and Pique and the atmosphere is good,"

. "The good vibe is magnificent.

"Here, Sergio is the captain and has more hierarchy and, at Barca, Gerard has more of a leadership role."

The Spanish midfielder Busquets thinks as they are both part of such historic clubs and they have that bitter rivalry among that it was a part of some flashpoints and art of the game.

He added: "There has to be everything but above all respect,"

"Sometimes you cross the barrier of respect for many things – because you do not want to let the rival be, for being the eternal rival.

"Let them say what they want. I'm not going to get into that war.

"There are times when you think about one thing, you can say another and between us, once we come here, we talk about football. We do not give it much more thought." 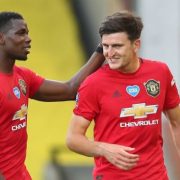