This season the Dortmund’s star arrival at Arsenal is yet to be confirmed but the Arsenal manager is optimistic about his move.

This season Arsenal’s Pierre-Emerick Aubameyang deal is not fully over the line but the Gunners manager admitted that he is delighted at the signing of the Dortmund star, on this Tuesday the Gabonese star has arrived at the London Airport but the deal between both the clubs are yet to be agreed and he has been made to wait as others players are also involved in this deal.

As per the reports are concerned this season the Frenchman Oliver Giroud will move out to Chelsea from Arsenal for £18, and he will free up space for the new coming Gabonese star in the North London side.

“We need people who can give us more offensive power – at the moment we are not efficient enough going forward and I'm convinced he will bring us that.

“He has a big challenge in front of him. He wants to do well in the Premier League and, overall, I believe he is welcome and that's absolutely good news for us.”

“But, of course, very important [is that we] make that happen soon because it's not over the line yet – but hopefully it should be done tomorrow [Wednesday].” 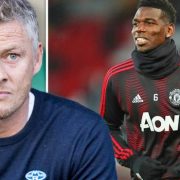