The last year’s runners-up struggled a lot this term to make it to the finals, the Argentine team heavily depends on their star man Lionel Messi, and he has earned the finals ticket for his country in their last qualifiers,

The team has some huge names in their squad and they also have shown that how well they can handle the pressure situation, but they end up as runners-up in three back to back tournaments,  in 2014 they lost the finals against Germany in the extra time and in 2015, and in 2016 both the occasion they lost the Copa America titles against Chile in the penalties.

In the recent time, the team has faced a lot of problems under their new manager Jorge Sampaoli,  they had an issue in the back line and also still they are unable to find the right combination in order to get the best out of from their exceptional strikers. And this could be the last opportunity for Messi to enlist his name to with world cup winners list. 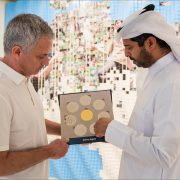