The Kolkata giant EAST BENGAL FC bolstering their squad for the upcoming I LEAGUE.

This season the East Bengal side already signs few foreign players in the squad, players like Ivan Bukenya.

But now the Red and Gold want to strengthen their Attacking force for the upcoming I league tournament.

As per our sources we get to know that the East Bengal side is recently approach to Kervens Belfort who is now playing ISL with the Kerala Blasters. Last day he was part of the Kerala Blaster team and he was substituted in that match.

This season the 24 year old Haitian striker made 13 appearances for his ISL side and scored three goals for them.

Few days ago the Red and Gold release the Korean midfielder Do-Dong-Hyun and now they are finding their replacement, and they found Kervens Belfort as a model substitute for Do- Dong- Hyun.

Their new English coach Morgan and the hierarchy is searching for more players and they have shortlisted few Asian players,

Along with Kervens Belfort they are also in a hunt for Japanese midfielder Kenta Uchida and for Australian striker Mirjan Pavlovic. 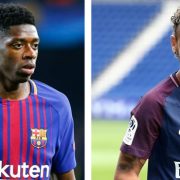