The British coach of East Bengal step down from his job after a series of disappointing result from his side in late.

As per our sources we get to know the Goan coach manager Armando Colaco will replace his spot.

The 60 year old British coach resigns from his  duty after his side lost four back to back losses in which they lost their crucial match against their arch rivals Mohun Bagan on 9th April 2017.

On this Sunday they lost their matches against the  DSK Shivajians which smashed their title hopes of Kolkata outfit.

Santosh Bhattacharya, the football secretary  said: ''I have got the resignation letter from Trevor (Morgan). I don't know about the future course of action. You should talk to the club secretary (Kalyan Majumder) to know about it,"

The Red and Golds is sitting third at the table with 27 points from their 16 games.

Armando Colaco voiced: "I am coming to Kolkata day after tomorrow,'

'I will be on the bench for the last two games. It will be a very tough job but I am ready to give it a try." 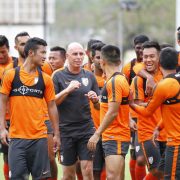