The19 year old Frenchman was linked to move to the Barcelona side before he joined the Borussia Dortmund and now he hopes he can join them when he will be ready.

Under Thomas Tuchel the young Frenchman has played every minute for them in this season in all competition, and he is off to a flier.
Thought he wants to play for the Catalan side that he admitted already, he wants to take his game to the next level in Bundesliga.

"Not now, because I want to grow and be a protagonist every Sunday," he told Mundo Deportivo. "But one day I will play for Barcelona."

The young 19 year old has already netted one goal for them and set up four in his 10 appearances in all competitions for them.
He is tied up with Dortmund till 2021. 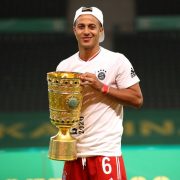