The Spanish newspaper has already claimed that the Portuguese and the Real Madrid’s star striker is all set to renew his contract with Real Madrid until 2020 or 2021.

Till now the deal is not confirmed by the club or by the Portuguese striker.

The 31-years-old Real Madrid’s striker’s future is under spotlight as Cristiano Ronaldo is in near to the end of his current contract with the club and the striker who had led the club to another Champions League win last season has already expressed that he wants to extend his future with the Spanish giant Real Madrid and now it seems like his wish is coming true, as Ronaldo’s close friend and UFC star McGregor has accidently hinted that the 31-years-old star forward is staying with the club for a long.

In an interview when he has been asked that, is there is any possibilities of overtaking the Portuguese star forward in the Forbes rich list,

“That’s will be tough” McGregor answered. 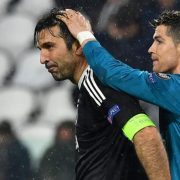