Last night the Real Madrid ace Cristian Ronaldo 7 pulled level with the Barcelona talisman Lionel Messi on five FIFA awards and he believes that there is more to come from both of them.

Cristiano Ronaldo 7 has won the FIFA best man awards last night in London and after winning the individual trophy the Portuguese superstar says that his rivalry with Lionel Messi is plenty of distance left there.

Ronaldo won the award and last night he comes ahead of Lionel Messi at the gala and the Brazilian superstar Neymar got the third spot.

After claiming that award now Cristiano Ronaldo 7 and Lionel Messi is now labeled the best player in the world.

In the last five years four times Cristiano Ronaldo 7 has come out on top of Messi and on each occasion, Messi got the second spot.

Last night both the superstar sat alongside each other and Messi gives Ronaldo diligent greetings after they announce him as a winner.

Ronaldo says in a press conference about their rivalry: "I don't compete with Leo,"

"He is a player, who is in the same era. He won five times. I won five times too — individual awards for the best in the world. So things are as they are.

"Obviously, I am happy because, as I said before, I am at the best club in the world. I have had the opportunity to demonstrate that I am at a very high level during the last few years. And I am still [physically] very well.

"So I am very quiet. I will see what's going to happen tomorrow, but at the moment I have to enjoy this nice moment of my life because you never know what will happen next."

But the question asked to him whether their rivalry is over or not? He replied: "It didn't finish yet… it is just starting." 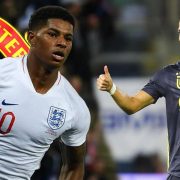