Manchester City and Chelsea will battle over the 24 year old Spanish international Isco in the forthcoming transfer window.

The young Spanish international was  played brilliantly in his last game for Real Madrid match where he has made two assists for the their two goals and after his performance the French coach praises about him after that match against Espanyol.

The 24 year old attacking midfielder is not getting the first team football under Zinedine Zidane this season as he was benched in the most of the matches by the French coach,

But a few days ago Real Madrid supremo claimed that the player is happy to stay with them,

Teams like Chelsea and Manchester City are eager to take the advantage of this situation and will try to rope him in their squad as both the teams will try to bucket him in the next transfer window.

Now it is an only matter of time to see whether he is going to stay there or leave at the end of this season.

This season the 24 year old made 24 appearances for the Spanish giants and scored 5 goals for them. 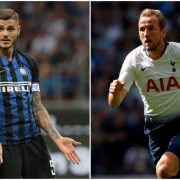