The 22-year-old Arsenal full-back always maintained that he does not want to join his former side, but the Spain international have melted the stance.

The Arsenal player admits that it is special to hear about the interest from his teenage club Barcelona.

Recently the youngster has extended his contract with his current squad until 2023 but despite that, he has regularly been linked with a potential move to his former club Barcelona.

In the beginning of this year, he stated that he did not want to rejoin his former club as he explained he feels underappreciated there.

On this, he said: "It's nice there are a lot of big clubs that are interested in me, but if one of those is Barcelona, that's special,"

"I don't forget I grew up in that home and I will never forget my stay at Barcelona."

"I left Barcelona because I felt the club was not confident in me, I didn't feel valued; [I felt] disenchanted."

The Arsenal manager Arsene Wenger said that it difficult to think Bellerin signing for his old club as he renewed his contract a few months ago.

"He has just signed a new contract and still has many years left."

Right now for Barcelona Sergio Roberto is playing for them as a right back after Aleix Vidal picked up an ankle injury in February.

With Bellerin Tottenham’s Walker, Southampton’s Cedric Soares and Joao Cancelo from Valencia is on the list of Barcelona. 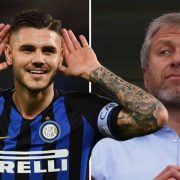