The French coach thinks that his team and his player can beat anyone and they have the quality to qualify for the next round in the Champions league if they were up against Madrid in the top 16.

On match day six the Arsenal side beat the Basel side in their home by 4-1,and on the other hand that night PSG dropped two crucial points against Ludogorets.

The Gunners will face a second place team in their top 16 game,most probably they will face the Real Madrid side or maybe Bayern Munich side in their next match in the Champions league.

The Arsenal manager voiced that they fear no one, and added:

"You look at the teams we can get, some look more prestigious, more difficult, and you would like me to say 'I don't want this team or that team' but that would put us already in an inferior position if it happens,"

"You can take Real Madrid, one of the favourites to win the competition, even against them we will have a chance of qualifying.

"Another inconvenient fact for us, we have not qualified for the last six years for the quarter-finals. That will be a huge challenge for my group and they will relish that."

The Gunners are now sitting at the second spot in the premier league table after 14 matches and the French manager is optimistic that his side can win this year premier league crown.

"I believe we have a good team dynamic and a very strong team spirit,"

"We are more mature than in previous years. Unfortunately, the same goes for the other teams. The Premier League is very open and interesting, there are a lot of good teams.

"We are in the middle of the fight for the title. We have a chance. December is an important month, we have some big games coming up. I am happy with the way we behave and our desire." 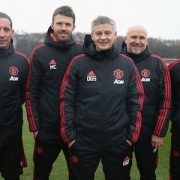