This season the Juventus side is playing scintillating football under the Italian manager but the Juventus coach still believes that there is room for improvement for his side.

The Juventus coach Allegri is happy the way this season is panned out for them so far but at the same time, he avouched his side is not perfect yet.

Last week they booked their place in the Champions league semi-final along with that in their last game against Genoa they won their match by 4-0 goals and with that win, they are now 11 points clearer than the second-placed Roma side.

The Juventus coach is over the moon with his team’s performance as they also booked their place in the Coppa Italia final.

But the Manger warned his boys that they haven’t achieved anything yet.

Allegri said: "We are not a perfect machine because we still have room for improvement, but the team really is having a great season,"

"It is absolutely extraordinary to be on 83 points with five matches to play and to have qualified for the Coppa Italia final and the Champions League semi-finals.

"It is still too early to be talking about the title. We have to remember that we still have to play Roma and until it is mathematically assured we cannot talk about the Scudetto. We have a couple of days to rest now and then we will focus on Atalanta, which will not be an easy game.

"After that, we have four days before the Monaco match, so that is plenty of time to recover and prepare for the clash.

"We have won nothing yet and have to take it one match at a time." 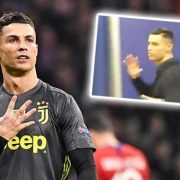