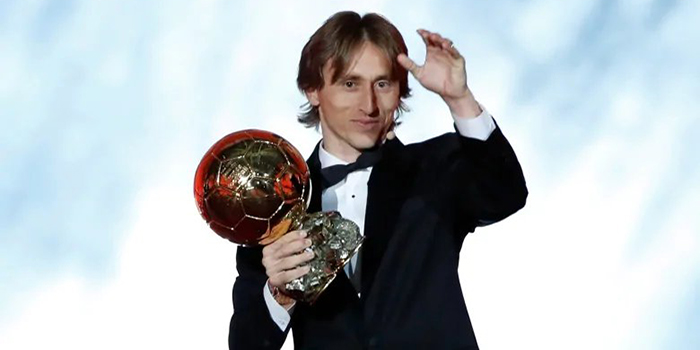 Real Madrid and Croatian midfielder Luka Modric recently expressed his happiness after winning the Ballon d’Or Trophy. The 33-year-old capped off a brilliant 2018 season after winning the accolade in Paris on Monday.

Barcelona great Lionel Messi and Juventus superstar Cristiano Ronaldo have dominated over this award. Both these players have won the trophy five times apiece in the last 10 years.

Now Luka has gone on to end that duopoly. As a result he has become a non-Messi or non-Ronaldo player to win it since Kaka in 2007.

Modric won the trophy after leading Croatia to the World Cup final. He also won the Champions League with Real Madrid for the third successive time.

“It’s a unique feeling, I’m happy, proud and it’s an honour,” he said as he accepted the award. “[There are] extraordinary emotions at the moment.

I just want to thank all those who helped me to be here tonight, I thank my team-mates, my coaches, the staff and Real Madrid, all those who work there, the coaches and team-mates in the national team, the ones who voted for me and my family, which allows me to blossom as a person.

“Always have dreams, I wanted to play in a big club, win titles, the Ballon d’Or is all I could dream [about] as a child, it’s an honour to win it tonight.

“Throughout my career I understood that work, persistence, believing in yourself, is the basis for expressing your talent. I like a saying – the best is never easy. For me, it was not easy. It was necessary to seize the opportunities.”

Modric, who also won FIFA’s Best Men’s Player award, acknowledged Messi and Ronaldo’s quality. However he also said that his success is a “victory for football”.

Modric believes his Ballon d’Or win is for all those players who deserved it. But somehow because of Messi and Ronaldo, those players could not win.

“These two [Ronaldo and Messi] were on some exceptional level for the last 10 years,” Modric said.

“Maybe in the past there are some players that could win the Ballon d’Or, like Xavi, [Andres] Iniesta or [Wesley] Sneijder, but it didn’t happen.

“People are finally, I don’t know, they wanted something else. I think it’s [a] victory for football tonight.

“I am happy that I am the winner but this award is for all these players that probably deserved to win but didn’t.”