South African pacer Dale Steyn made a comeback to international cricket after a stint with injury. He was bought into Royal Challengers Bangalore in place of injured nathan Coulter-Nile.

But mid way in the IPL, he once again suffered from a shoulder inflammation. As a result of this Steyn was ruled out of the entire tournament. Steyn could only play two games before getting a shoulder strain.

The Proteas team management are now concerned with Steyn’s recovery before the upcoming World Cup. Steyn took four wicket in the two games at an average of 17.25. It was back in 2016 when Steyn had played his last IPL.

The 35-year-old was asked by the South African management to immediately take rest. Once he returns home, his injury will be assessed further. The holder of 439 Test wickets, which is the highest in SA cricket, will be playing his final World Cup.

“Steyn will be assessed by a shoulder specialist and measures will be put in place to get him ready for the ICC Men’s Cricket World Cup in England and Wales next month,” Cricket South Africa said in a media release on Thursday.

RCB skipper Virat Kohli recently took to Twitter to express his feelings over the injured pacer. He prayed for a speedy and early recovery of his IPL teammate.

Kohli also referred to Steyn as a “champion on and off the field”. However if Steyn managed to get fit in time, he will face Kohli in the very first match that India will play. Both the teams will face each other on June 5 at Southampton. 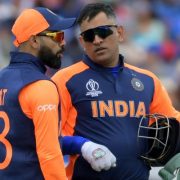