The on-field rivalry and banter between Virat Kohli and Tim Paine has been going on since afternoon of Day 3. The hosts secured a lead of 43 runs in the first innings and had the momentum on their side.

India came back well in the game as one of Aussie opener, Aaron Finch, retired hurt. However Usman Khawaja and skipper Tim Paine teamed up and strengthened their team’s position.

However both the skippers hogged the limelight for some different reasons rather than the game. Soon after a huge caught-and-bowl appeal on Sunday, the two skippers were heard going through a hilarious banter.

The stump microphones caught Virat saying, “if he messes it up, it’s 2-0.” Kohli was referring to the fact that India are 1-0 up in the series.

Paine was very quick to reply as he said, “You’ve got to bat first, big head.” They both then laughed it off. However the rivalry continued on Monday too as both were seen again exchanging some words.

It was the 71st over of the Australian innings. Paine was trying to finish a run when he saw Kohli standing in the way of him. Both of them didn’t touch each other, but Kohli’s body language revealed it all.

Moments later Paine followed Kohli and both them exchanged some words before umpire Chris Gaffaney intervened.

Kohli to Paine: “I’m not saying a word to you, why are you getting riled up?”
Paine to Kohli: “I’m fine. You’re the one that lost it yesterday, why are you trying to be cool today?”
Chris Gaffaney: “Oi, that’s enough, that’s enough.”
Paine: “We’re allowed to talk.”
Gaffaney: “Nah, nah, come on, play the game. You guys are the captains.”
Paine: “We can have a conversation… there’s no swearing, no…”
Gaffaney: “Tim you’re the captain.”
Paine: “Keep your cool, Virat!”

The umpire talked for some time with the two skippers and reminded them that they are the ones leading the team. He also said to both of them to focus on playing the game.

Ace commentator Harsha Bhogle commented that India needs to be careful and try not to indulge in any other ideas. He also said that Kohli enjoys these type of situations. This is because it brings out the best in him.

Here is the video of the entire incident: 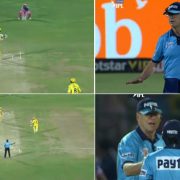