Virat Kohli , no doubt, is the new sensation of the cricket. Virat has the World talking about everything he does, either on or off the field. The bilateral series win in Australia in ODI and Tests, made him the First Indian Captain to do so. Though he didn’t have many runs with the bat himself, but he showed the world what the Indian Captain is made of by his Captaincy.

Recently, Virat launched his own App to interact and engage with his fans more. in his recent interaction, he was asked about his retirement. Virat answered by revealing his priority, his wife Anuska Sharma, and his family. There is a Life beyond Cricket.

I am blessed to be able to do it right now, it has to end one day. Eight years down the line, I think I will be totally focused on my family,” Kohli said interacting on his app.

I’m not going to pick my bat again , when I retire.

“The day I’d finish, I’d be totally spent and that’s the reason I am going to stop playing cricket. So, I don’t see myself coming back again and again. I think once I’m done, I’d be done and won’t be seen around the scene,” Kohli had said.

In one of his recent press conferences, he was asked about his retirement plans and whether he would play T20 leagues like BPL , Big Bash League and leagues around the world. He explained once he is done with his cricketing career , he is done . He will not pick his bat again. The 30-year-old feels that he will be spent and he might not come back again to play again once he retires. He revealed that he can’t even comment on the first thing he’ll do once he bids adieu to the game. 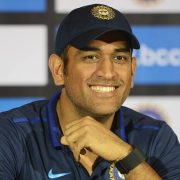