The Men in Blue sealed the five-match ODI series against New Zealand in the third ODI. They dominated over the Kiwis and won the game by seven wickets. As a result they now have a unreachable lead of 3-0.

Although New Zealand improved their performance, it wasn’t even close to compete with the mighty Indians. The Men in Blue already had a tough bowling attack. It got boosted by the inclusion of all-rounder Hardik Pandya.

The cricketer from Baroda made an instant impact upon making a comeback. He took an excellent catch by flying to his left in the 17th over to send back NZ skipper Kane Williamson.

It was excellent on the field today and that impact was seen in his bowling too. He completed his 10 overs and returned with figures of 2/45. As a result India bowled out the Kiwis for 243.

Even skipper Virat Kohli praised Pandya’s performance and said that he lends an amazing balance to the team. Hardik has learned the hard lessons during his suspension. As a result there was no out of the ordinary celebrations.

Even Kohli respected the importance of respecting the game. He hoped that the all-rounder comes back stronger than ever. The controversial incident has ruined Pandya’s start of the year.

He will now be looking to perform the same way as he did today throughout the tour. In the upcoming matches he would look forward to good performances with the bat too.

During the controversial period, fans had kept a close watch on Pandya. After today’s performance many have praised him for letting his performance do all the talking.

Many hailed him for that superman catch. His bowling was so tight that it didn’t give the opposition to up the ante. Pandya was thankful towards the fans. He expressed all his gratitude through his official Twitter handle. 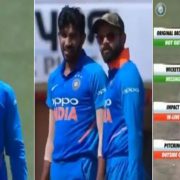