Over the last one year Australians David Warner and Steve Smith has been in the news for wrong reasons. However after serving a one-year ban, they have returned to the field of play.

Warner has been a star member of the Sunrisers Hyderabad. He is currently the leading run-scorer in IPL 2019. On the other hand Smith was handed the captaincy of Rajasthan Royals.

Warner has so far scored 611 runs at an average of 67.88 with seven fifties and one century. On the other hand Smith had a lacklustre first half. But now he has come back to form and has scored 319 runs. Both of them have one more IPL game before returning to Australia for World Cup preparations.

Both Warner and Smith suffered from elbow injuries before the start of IPL. While Warner’s injury was a minor one, Smith had to undergo a surgery. The former Aussie skipper is currently having a heavy tapping on his right elbow.

In the game between RR and SRH on Saturday, Smith took a brilliant diving catch to dismiss Warner. However he fell awkwardly on his tapped right elbow. After completing the catch he seemed to be in pain as he was clutching his elbow.

However he didn’t leave the field and later came out to bat also. Smith scored 22 in RR’s successful chase of 161. During the post-match presentation, Smith revealed that he hurt his elbow.

“Just landed on the elbow. Hopefully, it’s OK, it hurt initially because of the impact. I’ll know more when I take the tape off,” said Smith. He will return to the Aussie side after 14 months and will play in the upcoming World Cup. 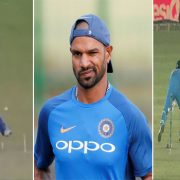 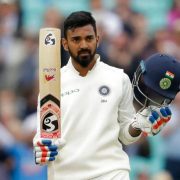