Many cricketers have transformed in their careers after becoming captain of their respective sides. A captain of a team is the most important member as he has the main responsibility. In T20 cricket he becomes more important, as he needs to take a decision in a split second.

Throughout the 11 seasons of IPL, the cricketing fraternity has seen many captains. The tournament has given many players opportunity to show their captaincy skills. Legends like Shane Warne, who was deprived of captaincy throughout his career, became captain in IPL.

Indian players like Rohit Sharma and Gautam Gambhir became captain in IPL and became successful. Moreover the added responsibility did wonders to their game and improved them significantly.

Here are five players who can become future captains in IPL:

He is already termed as the next big thing in Indian cricket after Virat Kohli. In 2018 Shaw led the Indian U19 team to World Cup glory. Shaw possesses elegant footwork and his technique is like the legendary Sachin Tendulkar.

The future of Indian cricket was purchased by Delhi Capitals in 2018. He slowly became an integral part of the team and will surely be a key member this season. Shaw is expected to achieve bigger and greater things, and become future captain in IPL is one of them. 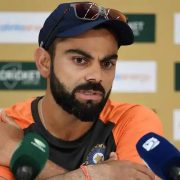