The current temperature in England is currently at an average 30 degrees (C), which is considered quite warm and the English is suffering from this.

This warm temperature has somehow filled the hearts of all the Indians with hope as their nation’s proud cricketing team will be facing the Brits in a gruelling 5-match Test series.

Indian legend Sachin Tendulkar, who is currently enjoying his vacation in the Queen’s country, reported that, “It’s quite warm here. Weather’s going to be a critical factor”.

Tendulkar also referred to the surfaces which will act differently than the usual English turning pitches. “Surfaces will decide how active the spinners get. If this weather stays,” says Tendulkar.

He also pointed to the recently-concluded ODI series where the spinners dominated. Having said this he believes India will have a slight advantage as they can play spin comparatively well than the English batsmen.

He also warns that weather will not only the deciding factor in the series, especially in those conditions where in the previous tours of 2011 and 2014, they were completely disastrous.

“Drawing a balance between knowing that the disaster of 2014 has to be kept in mind and yet keeping in mind that it doesn’t really matter right now is what the players need to understand,” he says.

Tendulkar also made a very interesting point at this context. “It helps to remember how an earlier experience of the same tour was unpleasant (2014). Yet, what’s also important to remember is that change is the only constant. In a different time, in a different setting, in relatively different conditions and a different set of players, it’s again a new contest. You move on, set yourself a new challenge,” he says.

He touches upon the point of “benefit of hindsight” but in a different way. “The first basic rule (of an overseas tour): Respect conditions. It’s the key. The first morning of the series, that first over, the first spell – that’s always the key. It was the same in South Africa, it’ll be the same in England,” he says.

He explained that to win this series India must go in with a clean slate as well as keeping in mind the previous script which was jotted down the previous time.

“The question is how do you keep your mind blank? Drawing that balance between knowing what happened when you visited here the last time and at the same time, telling yourself that past is not what’s going to matter right now is all about drawing the balance. That’s the tricky thing. You got to know when to fill your mind up with all that you’ve learnt from your previous tour here and then got to know how to keep it (your mind) blank when you’re here again, all fresh,” says Tendulkar.

When talking about Cheteshwar Pujara, who took 70-odd balls to get off the mark in a county game for Yorkshire, Tendulkar believes he is struggling with a psychological block at this moment.

(When asked), Tendulkar does admit “It’s far too much. Again, I’m not trying to be critical here. It’s good to be cautious, good to respect the conditions, but…,” he trails off.

However he acknowledges Pujara’s importance at No. 3 in Test lineup as he is a good weapon in the batting armoury. “(But) There needs to be a good deal of balance between wearing down the opposition and tearing them down. Batsmen need to understand that balance,” says Tendulkar.

This is why Tendulkar insisted on one fact that a batsman should not sit in the dressing room and rely on others’ judgements but rather walk out and experience on his own.

“Use your own discretion, follow your own judgement. When I used to be in the dressing room, waiting for my turn to walk out to bat, I never went by what was happening to the batsmen on the field,” he says. 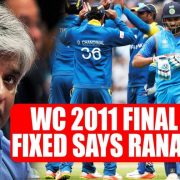